This will be published along with my dissertation when it becomes unembargoed. I also gave a talk on this in the 2017 AAG. So, below is the initial exploration of what a spatial autocorrelation/partial autocorrelation function might look like.

To do this, I’ll first grab the results from a github repo I’ve been tracking. Thanks to user @tonmcg for making this available in plaintext, so we can grab it using pandas without downloading it.

Since the spatial autocorrelation function (and variogram) are related to the spatial positions of our data (or, in the least, a topological arrangement of our data), we need to merge these county-level results with the actual geometries of each county. To do this, I’ll use the example county dataset in PySAL, the Python spatial analysis library.

Then, to merge things up, I’ll create a common key based on the FIPS code of the county and merge the data

where (d_{it}) is raw vote cast in county (i) for the Democrat candidate in time (t), and (r_{it}) is the comparable raw vote cast for the Republican candidate. We can just do simple series operations to get this done:

These distributions tend to appear Gaussian, if not a slightly skewed Gaussian. But, we’re not really making any distributional analyses (like we were in my exploratory spatial regression notebook), so I’ll let this sit for now.

Next, since I’ll be mapping our data, I’ll use geopandas to reproject the raw data from PySAL (in Plate Caree projection) into a better projection for choropleth mapping, the Albers Equal Area Conic projection:

Now, before we get any further, let’s make some maps of the two-party vote shares in 2008, 2012, and 2016 (alongside the vote distributions), and explore what spatial distribution dynamics might be going on: 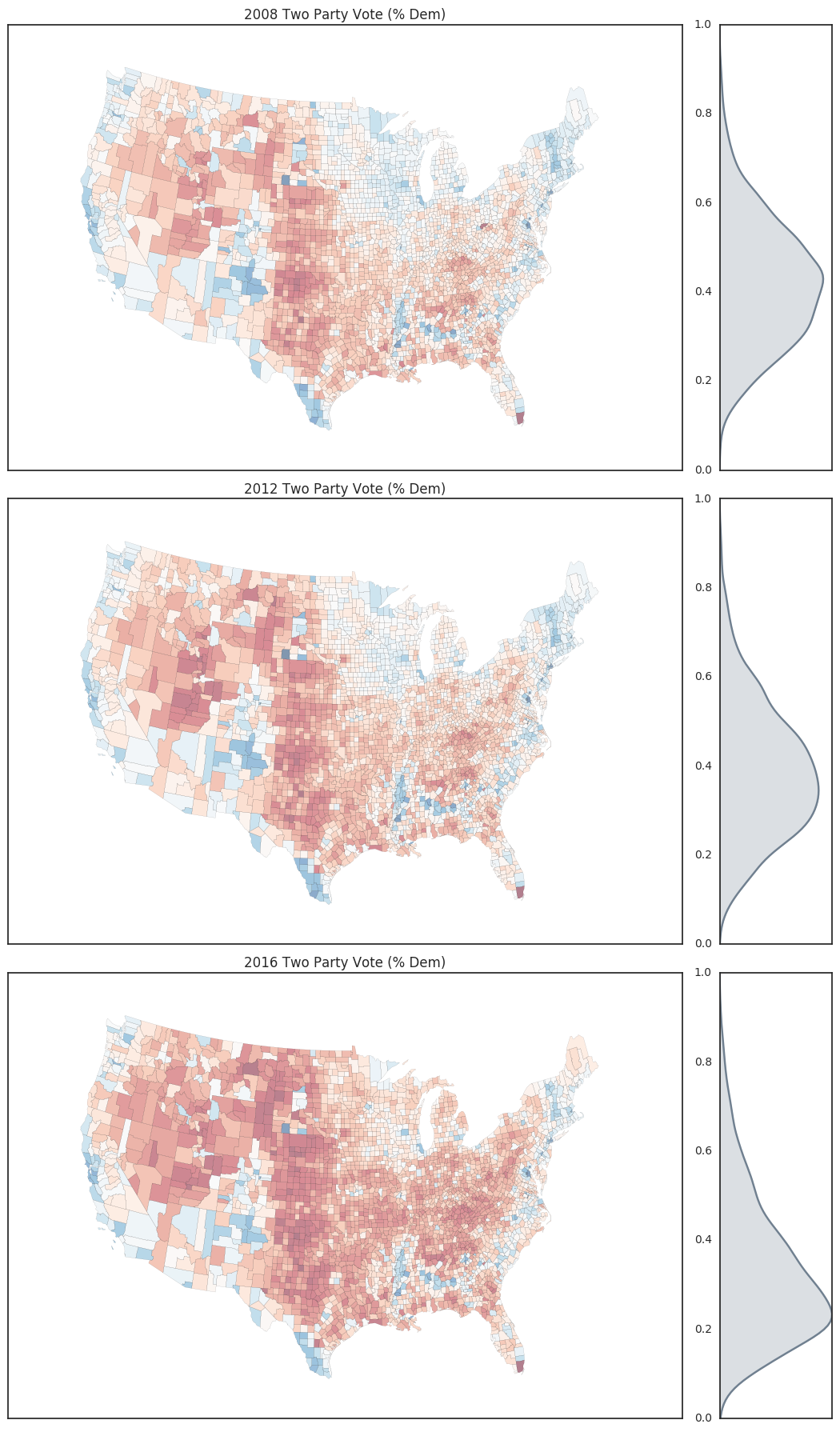 One thing that’s super clear when you do these maps of two-party vote is that more counties tend to vote Republican than Democrat. In the KDE plots, you see this as the mode of the vote share distribution is well below .5, even in 2012, when President Obama won reelection handily. While the best analysis might be to drill all the way down to the voter tabulation district level, that data attached to its geographies is pretty hard to find, and often to large for most to work with on a national scale. I’ve been working on putting it together in an sqlite dump, but that takes time :)

The second thing that’s clear is that the collapse of the “blue wall,” Minnesota, Wisconsin, Michigan, looks like it was actually a gradual process at the county level. Lots of marginally-blue counties flipped, resulting in a statewide flip. As a geographer, another thing that’s interesting about the electoral mosaic is almost how indistinguishably rural Illinois is from its surrounding areas in MO and KY. I think (if I were to finish my PhD and move into some electoral modeling), I would seriously look into markov random field models (say a hierarchical SAR/CAR model) of this process, since the state-based hierarchical models like will miss this type of proximity-based correlation entirely.

How are counties related in time?

This is a reasonable first question. It’s well known that past two-party vote share tends to predict future two-party vote share quite well at an aggregate level and over all ranges of vote share. Of course, what really matters in the end are how well the wins in each state correlate over time, which is a different question. While we could address this with county-level vote, I’m using the county-level data to look at distribution dynamics, so I’ll let that slide for now.

First, we drop the counties where we’re missing data:

Since we only have two time periods, the autocorrelation plot of this would look rather uninteresting. I’ve been working on this at the congressional district level over the 20th (and now 21st) centuries using some data I grabbed from the CLEA, mixed with a little ICPSR6311, and merged with the UCLA collection of congressional districts, and hopefully getting released through the research cluster I work with at UChicago. Again, this all takes time, but the data is ready to go, so ask me if you’re interested.

How about in space?

Of course, an interesting question also might be to look for clusters in vote. We know about rural/urban divides and regional divides in American voting, so we would expect some pretty strong correlation between neighbors at a county level.

However, what’s the order of this process? That is, how far away are counties related to one another?

This has a pretty clear analogue in time-series autocorrelation analysis. The autocorrelation function for a serially-correlated signal computes the correlation between the signal at time (t) and the signal at time (t-k), where (k) is some arbitrary lag. A related concept, the variogram in spatial statistics, computes the variance of the difference between locations as they get further and further apart. The partial autocorrelation function (which relates the signal at (t) and (t-k) when accounting for all lags between), is also available in a geostatistical context by conditioning the variogram on adjacent pairs below the range. But, this is incredibly computationally intensive (and the variogram is sufficient for all kinds of geostatistical models), so the partial variant is much less well used.

Unfortunately, the scale of the US county system in terms of the distances between places gets much larger as we get west than when we are in the east. One way this is handled in spatial econometrics is to use the adjacency matrix to define neighborhoods. In this case, adjacent counties are considered neighbors, regardless of the actual distance between counties. This allows the connectivity graph relating observations to have a similar density when the polygons being related dilate but keep the same topology. I’ll plot this graph over the counties below. Here, I use rook contiguity, which means two counties are adjacent if they share a boundary. 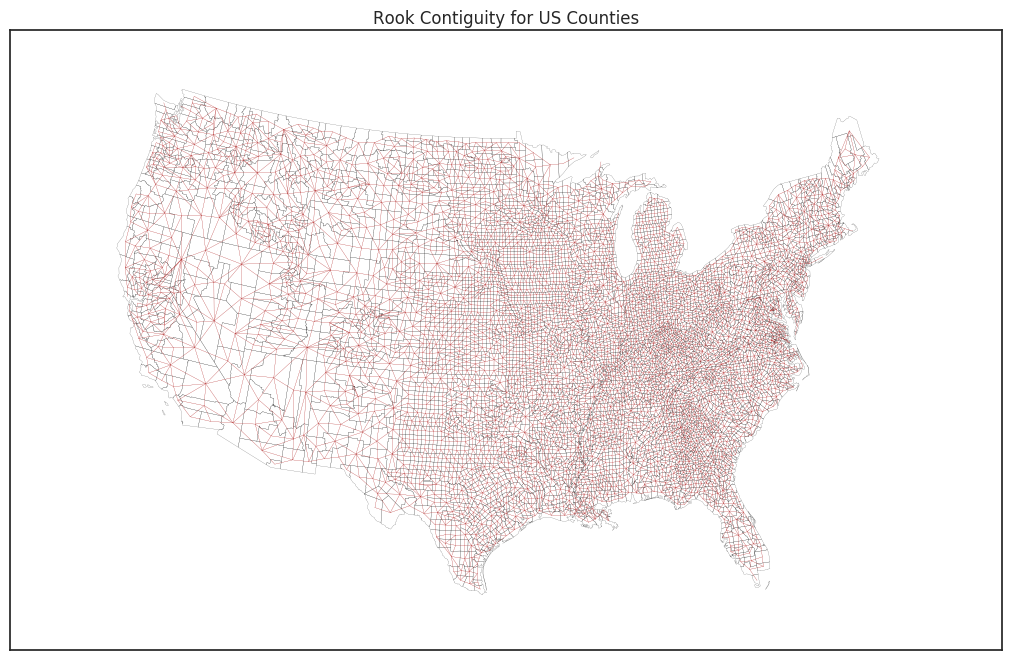 To be clear, the spatial lag is analogous to the temporal lag of a variate. In this case, the spatial lag refers to the average of the neighboring values around each observation. Using a row-standardized adjacency matrix (\mathbf{W}), the lag of (Y) is expressed simply as (\mathbf{W}Y).

This means that the bivariate Moran’s I statistic is stated for centered attribute vectors (y) and (x): \[ \frac{x’\mathbf{W}y}{x’x}\]

This results in a single statistic (and accompanying (p)-values computed using permutation methods) that relates the values of attribute (x) to the lag of (y). We can use this statistic to relate votes between two times. In the following, we see that county vote in the previous year is a good predictor of the vote in the next year:

Another way to look into this might be to look for clusters of volatility in how the vote changes betwen year to year. To do this, we’ll be using the quadrants of the Moran Scatterplot to interpret local indicators that show whether some counties are swinging together with their neighbors, or if some counties are swinging in opposition to their neighbors. Moran statistics, computable in PySAL, allow us to determine both the relative direction (in terms of more or less Republican) and the neighborhood dynamics (in terms of how the nearby counties move). The local moran statistic for a vector of centered observations (z) is computed: 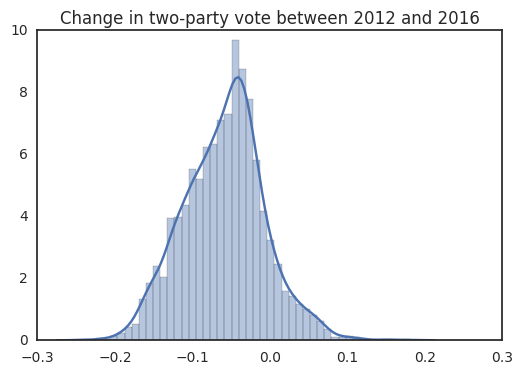 Then, we’ll do some examination by the quadrant of the scatterplot. To make everything more clear, you might want to read this alongside this plot. We’ll step by quadrant of that scatterplot:

Observations in quadrant I are counties where both the focal county and its neighbors had large increases in democratic vote share. These would represent counties where both the focal and its neighbors intensified in support for Democrats. Unsurprisingly, we see that the largest cluster strengths (in terms of the size of the mlocal_1216 statistic) occur in Utah & Virginia, states that were known to swing pretty strongly towards Clinton.

Surprises might be that Montgomery County, MD and those Georgia counties where Clinton was rumored to be surging in October show up here as well. Interestingly in some, cases (like the Utah counties or Georgia counties) this improvement is sometimes from very low (say 14% in Cache county, UT) to much better (30% in Cache county, UT). Thus, a lot of this is probably occuring among weak partisans who might be swayed by the (supposedly hefty) respectability bias about Trump, but who might otherwise vote Republican with a clear conscience.

And, unsurprisngly, you also see some consolidation going on, where county shifts towards the Democrats intensified in states typically won by Democrats, like the California counties in the list below.

On the opposite side of the origin in the Moran scatterplot, quadrant III would indicate “low-low” clusters, areas where the two-party vote decreased significantly in both the focal and neighboring units. Thus, these would be clusters of intensifying Republican support.

In these, you see precipitous drops in Democrat support in Missouri, Ohio, Iowa, and a cluster centered around Calhoun county, WV. This largely comports with the narrative that Ohio dropped out of being truly contested this cycle, with eventual vote totals falling well below the expected contestible range. Notably, this was spatially correlated, so not only did this affect counties in Ohio, but these clusters indicate that there was spillovers.

Like, for Monroe, Guernsey, Noble, Morgan County, OH, bordering WV, this analysis indicates that that group of counties swung hard towards the Republicans, and did so in a way that’s statistically nonrandom in terms of the spatial location of those counties in Ohio. Notably absent from this are counties in the northwest of Ohio, abutting Michigan, that might indicate nascent spillovers between those states.

It also seems that heartland areas (Henderson county, IL, as well as the counties in southern Iowa and eastern MO, also swung together in a spatially-cluster for Trump.

We see some pretty counter-iintuitive counties here. Linn county, OR and Lake county, CO weren’t things that were on my radar, but it seems they’ve moved anomalously towards the Republicans while their neighbors intensified in Democratic support.

Like the second quadrant, these are also outliers. However, these are areas whose swings are more Democrat than average while their neighbors had swings that are more Republican than average. This seems to pick up a couple of Democratic areas where the general trend towards Trump failed to spill over between counties as strongly as it would have otherwise.

So, for example, Nicollet county, MN swung towards Trump at slightly more than the unweighted average shift towards Trump at the county level. But, this indicates its neighbors swung even more strongly.

To match this up, a map of the swing and the cluster statistics might be helpful. First, the swing map: 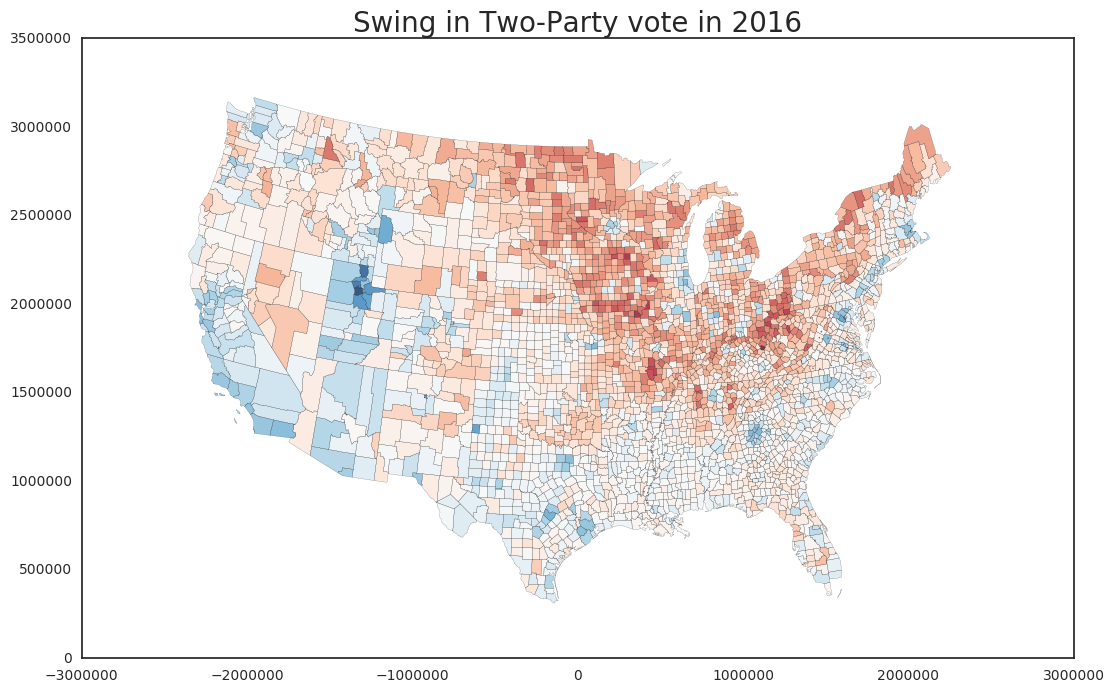 And then the cluster map: 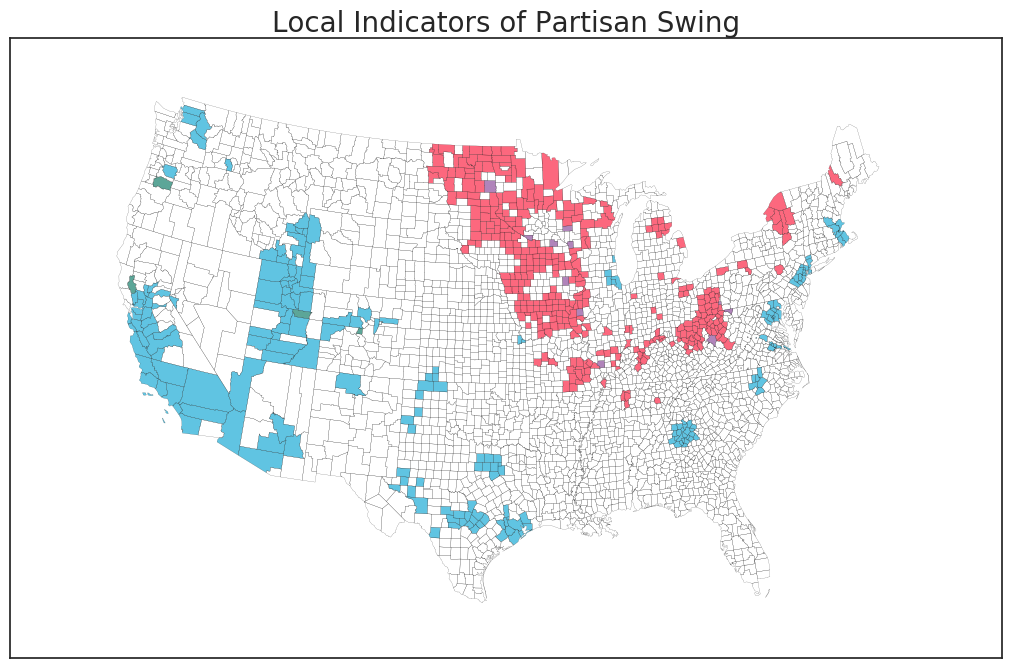 More specifically for these labels:

where (\mathbf{W}^k) is the adjacency matrix for (k)-minimal neighbors. The (k)th-order partial spatial autocorrelation function is:

I plot these for the vote shares in 2016 below,

In a time series context, this would be akin to considering both the observation from 2 periods ago and the previous observation in the set of 2nd order neighbors. In contrast, this graph shows the correlation as the set of “considered” counties radiates uniformly outwards from each focal county.

Thus, a typical ``cluster’’ in the sense of counties being more related to each other than not, is a subgraph somewhere south of 15-counties in radius. If this seems too big to you, you’re right. We need to account for the whole neighborhood contained with the (k)-radius cluster: 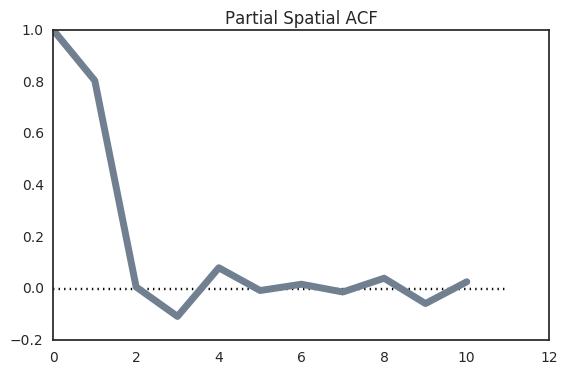